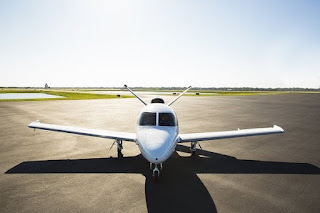 The goal of this chapter

Why this chapter essential？

Understanding how these forces work and knowing how to control them with the use of power and flight controls are essential to flight.

By using the aerodynamic forces of thrust, drag, lift, and weight, pilots can fly a controlled, safe flight.

Forces Acting on the Aircraft 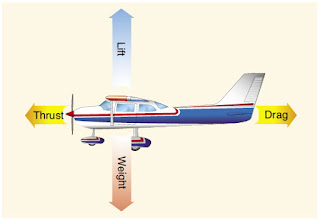 the forward force produced by the powerplant/propeller or rotor.

a rearward, retarding force caused by disruption of airflow by the wing, rotor, fuselage, and other protruding objects.

opposes the downward force of weight, is produced by the dynamic effect of the air acting on the airfoil, and acts perpendicular to the flightpath through the center of lift.

The combined load of the aircraft itself, the crew, the fuel, and the cargo or baggage.

In order to maintain a constant airspeed, thrust and drag must remain equal.

For an aircraft to move, thrust must be exerted and be greater than drag.

The pilot coordinates angle of attack （AOA） and thrust in all speed regimes if the aircraft is to be held in level flight.

Definition of AOA:the acute angle between the chord line of the airfoil and the direction of the relative windthese regimes can be grouped in three categories:

When the airspeed is low, the AOA must be relatively high if the balance between lift and weight is to be maintained.

During straight-and-level flight when thrust is increased and the airspeed increases, the AOA must be decreased.

AOA were not coordinated

If the AOA were not coordinated （decreased） with an increase of thrust, the aircraft would climb.

Level flight at even slightly negative AOA  is possible at very high speed.

Drag is the force that resists movement of an aircraft through the air.

There are two types of Drag:

Called parasite because it in no way functions to aid flight.

Parasite drag is comprised of all the forces that work to slow an aircraft’s movement.

There are three types of parasite drag:

Form drag is the portion of parasite drag generated by the aircraft due to its shape and airflow around it.

Form drag is the easiest to reduce when designing an aircraft.The solution is to streamline as many of the parts as possible. 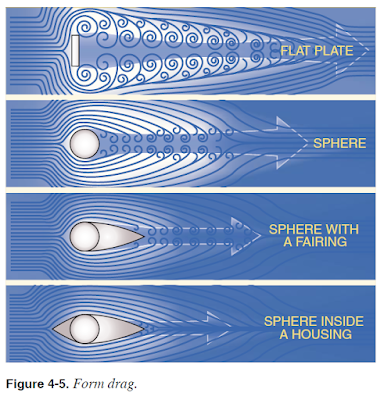 For example, the intersection of the wing and the fuselage at the wing root has significant interference drag. 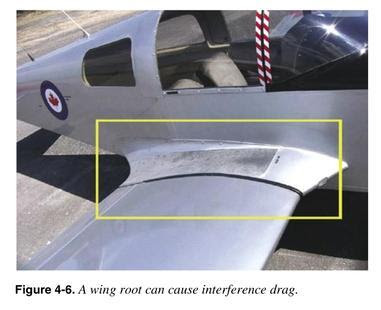 Skin friction drag is the aerodynamic resistance due to the contact of moving air with the surface of an aircraft.

In order to reduce the effect of skin friction drag, aircraft designers utilize flush mount rivets and remove any irregularities which may protrude above the wing surface.

Induced drag is a result of anairfoil developing lift.It is an established physical fact that no system that does work in the mechanical sense can be 100 percent efficient.The more efficient the system, the smaller this loss.

Induced drag is inherent whenever an airfoil is producing lift and, in fact, this type of drag is inseparable from the production of lift.

The spirals of air that trail off the tips of an airplane’s wings also contribute to drag. These wing tip vortices steal energy from the motion of the airplane, creating vortex drag.

In the vicinity of the tips, there is a tendency for these pressures to equalize, resulting in a lateral flow outward from the underside to the upper surface.

This lateral flow imparts a rotational velocity to the air at the tips, creating vortices, which trail behind the airfoil. 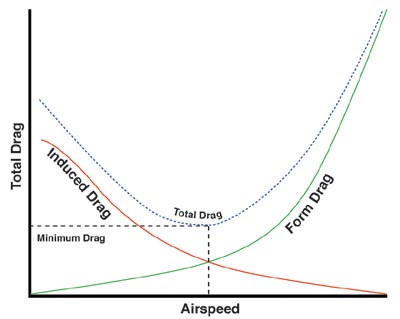 As airspeed decreases to near the stalling speed, the total drag becomes greater, due mainly to the sharp rise in induced drag.

As the airspeed reaches the terminal velocity of the aircraft, the total drag again increases rapidly, due to the sharp increase of parasite drag.

At some given airspeed, total drag is at its minimum amount.

Drag is the price paid to obtain lift.

The lift to drag ratio （L/D） is the amount of lift generated by a wing or airfoil compared to its drag.A ratio of L/D indicates airfoil efficiency.

Note that the maximum lift/drag ratio （L/DMAX） occurs at one specific CL and AOA. If the aircraft is operated in steady flight at L/DMAX, the total drag is at a minimum.

Any AOA lower or higher than that for L/DMAX reduces the L/D and consequently increases the total drag for a given aircraft’s lift. 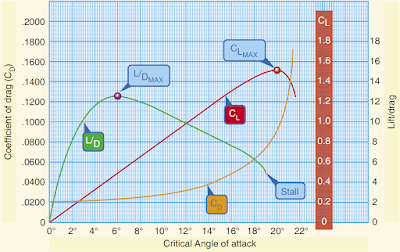 The CG may be considered as a point at which all the weight of the aircraft is concentrated. If the aircraft were supported at its exact CG, it would balance in any attitude.

It will be noted that CG is of major importance in an aircraft, for its position has a great bearing upon stability.